How The MacBook Air Cools Itself 2022 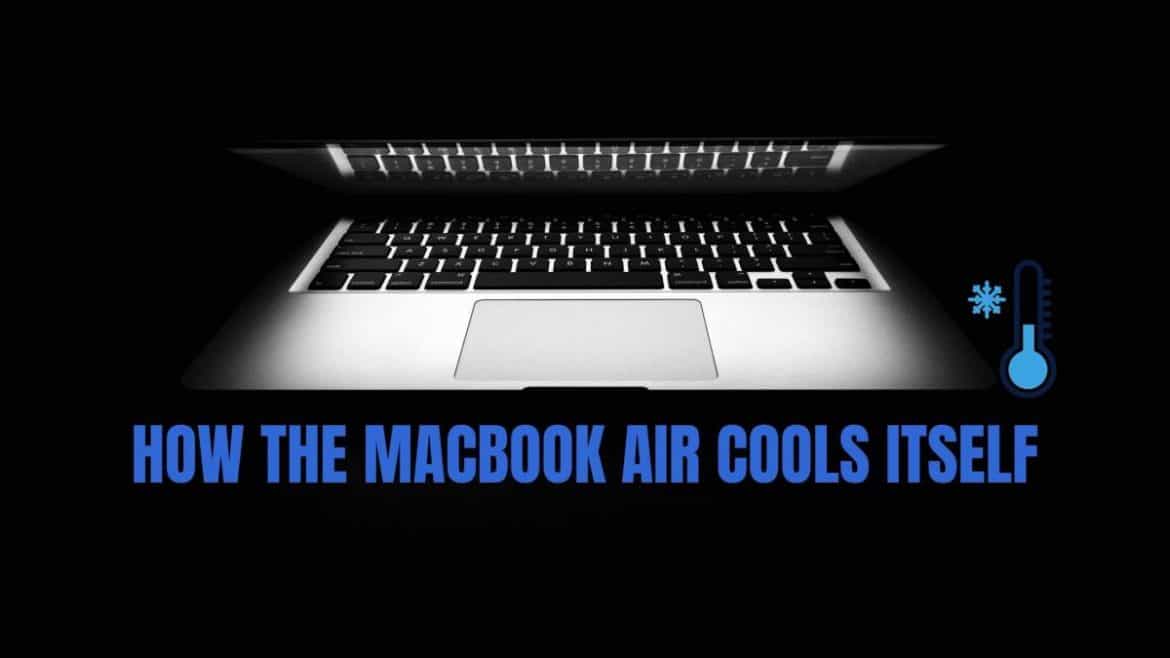 Apple has been known for making state of the art laptops with faster performance with every new series that is rolled out. With faster processing power the heat generated inside the laptop is quite a lot.

Apple has found new and innovative ways to cool its laptops with their unique design and body. But how exactly does it keep the MacBook from overheating?

I purchased the 2020 edition of the MacBook Air after using the 2016 edition for quite some time now. I found that the fan speed on the new MacBook Air ran more often than my old mac which was quite surprising since it’s new.

So I looked up online and found the reason why and put together this article for you to have a better understanding of How The MacBook Air Cools Itself. I’ve also added some tips to help keep your MacBook Air running cool and efficient.

Also Read: How to block ads on Mac?

How The MacBook Air Cools Itself?

The MacBook is Apple’s line of laptops that redefine fast computing Currently, we have two different models available in the MacBook series: the MacBook Pro and the MacBook Air. Since these laptops are super powerful, they tend to generate a lot of heat.

So, in order to keep the device cool, Apple has used a number of methods so they don’t overheat. Components such as cooling fans, air ventilation systems, aluminum body and thermal paste are some of the ingenious ways the Apple MacBook Air cools itself and assures proper airflow.

Cooling Properties of a MacBook Air

There are 5 main cooling properties of the MacBook Air. These built-in properties help drastically reduce the core temperature of the MacBook Air and keep the device cool. Each component was hand picked by Apple during their R&D sessions to develop user-friendly laptops that have a powerful heat dissipation system.

The cooling fan is the primary part of any laptop that is used for cooling the laptop with proper airflow in and around the motherboard, the airflow allows the hot air to escape and cool air to enter and circulate throughout the motherboard.

The MacBook Pro has two or one fans depending on the model, graphic card and size, Whereas the MacBook Air, comes with only one fan which is more than enough to cool the laptop.

The fans regulate cold air around the internal components pushing the heat out of the laptop through the vents creating a cooler environment inside, avoiding heat from building up and causing damage.

These fans are strategically placed to cover the entire laptop and can go up to mind-blowing speeds to regulate the airflow inside the MacBook Air.

The cooling fan is, without a doubt, one of the most important parts for cooling a MacBook.

All of Apple’s laptop designs have air vents designed according to the body of the laptop to ensure optimal cooling. In a MacBook Air, the main vents are found in the folding hinge that connects the monitor to the keyboard.

The hot air is pushed out with the help of the cooling fan and out of the vents near the monitor. This is the reason why you might feel the upper part of the MacBook to be warm, this is perfectly normal for all MacBook’s.

As you all know aluminium is a good conductor and works amazingly well with the MacBook Air. Apple has been using these casing from the 2012 model and has been the best move yet by the brand.

The case is designed to regulate proper airflow when placed on a table or lap. The underneath of the case is raised by four circular shaped legs that prevent the laptop from losing grip and simultaneously allowing air to pass underneath to cool the motherboard.

This is done so that the hot air can escape and cool air can run and filter the bottom of the laptop reducing the heat and preventing it from getting too hot.

So, avoid keeping your MacBook Air on surfaces that might block this airflow like over a pillow on your lap or blanket.

Thermal Paste is an adhesive used to apply on top of Integrated circuits to keep them from overheating. In the MacBook Air, it is applied over the processor that is the mind of the MacBook.

The Thermal Paste is long-lasting and usually lasts the life of the processor. In some cases, it can be re-applied when given for service to better disperse the heat which can be done only by a professional.

Apple is known for making numerous programs that only the Mac OS supports; one such program that helps reduce the internal temperature is smcFanControl which is available on GitHub.

It controls the fan speed and gives you the liberty of manually adjusting the speed if you feel your MacBook is running too hot. This is a good program to run if you feel the in-built judgement of the fan is lagging or fluctuating. The program can be used only to increase fan speed and not reduce it.

Another program that can help you maintain internal temperature is CoolBook, it allows you to down-clock and under-volt your MacBook Air processor.

How does the MacBook Air M1 cool itself without a fan?

Apple’s new M1 Processor uses a different method of cooling when compared to the previous versions. Instead of a cooling fan to disperse the heat, a heat spreader made of aluminium is used.

A copper pipe is also added that helps transfer the heat to the heat-sink, the heat is then pushed out with the help of a fan rather than the fan doing all the work. The MacBook Air M1 Chip has a cold plate over it, this helps absorb the heat directly from the processor allowing improved heat dispersion.

To further cool the laptop, copper pipes are spread around the motherboard and a vapor chamber to help cool itself.

The fans have been removed in the MacBook Air M1 because it does not get hot very easily. I had multiple tabs open and various other heavy load barring apps open and used it simultaneously. The MacBook Air did not get heated as much as my previous version MacBook.

The MacBook Air M1 is one of the first laptops to run without a fan and has provided successful results so far.

Tips to help you keep your MacBook Air running cool

There can be multiple reasons why your MacBook Air might be overheating. This comes to mind when you hear the cooling fan sound like the turbine of a jet. The fans do their best to cool your mac and stop it from overheating. If it cannot, your MacBook has a chance of shutting down by itself to help protect you.

I’ve learned a couple of tricks over time that has helped me stop my MacBook Air from overheating. Here’s what you can do.

If the MacBook Air is still facing heating issues after following all the tips above, you will have to take it in for a service to the showroom. But the chances are the issue should be solved with the above steps as these amazing machines are built to last.

I hope this article has helped you understand How the MacBook Air Cools Itself.