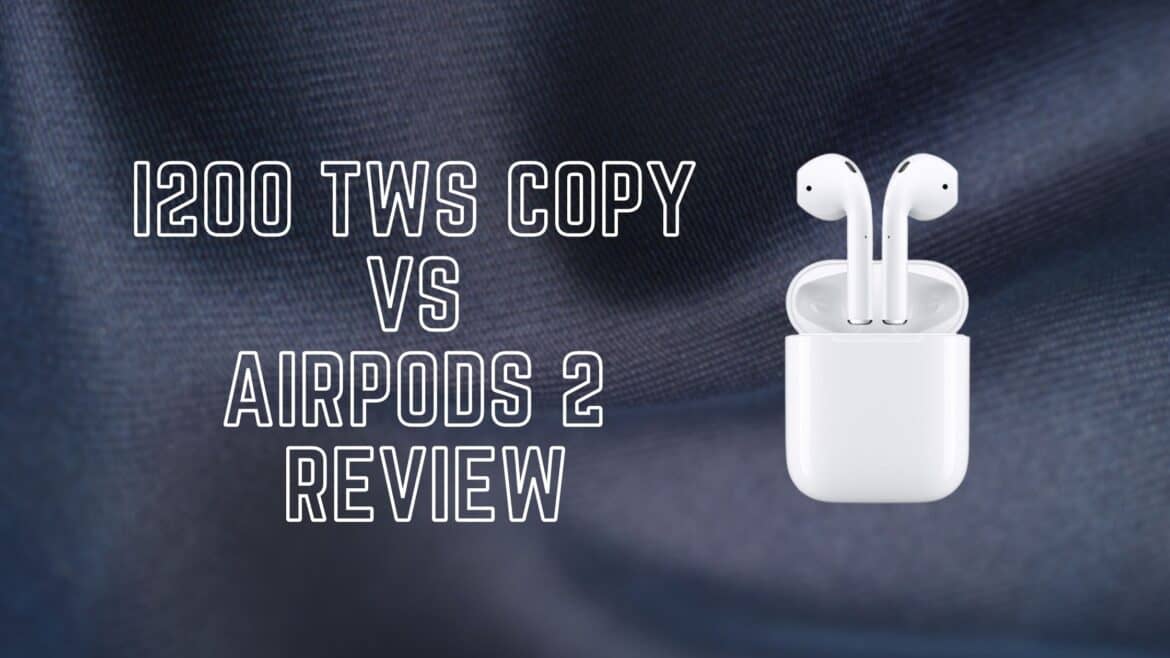 This article will be a comparison between the i200 TWS copy vs AirPods 2 review. It’s going to be a fairly quick review today so I’m just really going to be covering the main differences.

For those who are looking for a bit more of a in-depth I200 TWS review, you can click on that link up there in the corner.

While the i200 TWS and the AirPods 2 look strikingly similar, the main differences between both models are the packaging, sound quality, weight of the earbuds and overall performance of them. Let me break it down for you by listing out the main differences and similarities of the i200TWS and Apple’s AirPods 2.

I’m pretty plain and clear there. It’s good that these boxes are sent in non- logo marked boxes though because a lot of the time i do know that when i ordered stuff to the Fenian logo boxes and customs from my country have sent me letters saying you know we’ve destroyed the package of the your order so sorry.

Why does that happen?

Customers basically destroys packages at the border that is sent in IP theft mark boxes like this because that is illegal to send boxes it isn’t from Apple direct so if anybody I guess says hey you know get a box that looks like that um you might get it but at the end of the day you are running the risk that somebody from customs will destroy that.

In my opinion, it’s just not a great idea.

I guess if I was to sort of point out any obvious differences it would really just be that the hinge is a little bit different between the two of them.

This is obviously a bit more of a flush fit and this one is maybe like you know 97% spot-on it’s not quite as flush as the Apple one but having said that this thing costs like $70 and this thing costs like a hundred and ninety nine dollars so you have to be pretty realistic with your expectations and I think given that essentially your average person is going to say that looks identical.

I think I’d rather save the money then spend 199 dollars on this in terms of the sound.

I don’t really have any audio clips to show you guys but these ones I’ve sort of owned for quite a number of weeks now. These ones I do use on the off and on one thing that I can say in terms of the audio quality is the two of them are the same.

I myself use them for watching movies there’s no lag from my perspective when I’ve been using them to watch movies on say like the Netflix app or anything like that in terms of Spotify or Apple music again it’s all been fine so from my perspective.

I have not been able to notice any difference in terms of sound quality between the two of them one other thing which I did sort of start to notice after a while and I just want to just want to give everybody a bit of the example of what I’m talking about here.

The real one weighs 48 grams and the Klein one weighs 43 grams like when I was first using the clone one.

I did start to notice that it was quite heavy in the hand compared to some other ones that I’ve tried before. This is actually quite a heavy clone and one of the reasons why that feels ice is anybody that’s actually got real Apple earpods knows that it’s got a really premium feel on the plastic; the hinge etc feels good the snap and the white in the hand feels like you bought something that’s valuable.

They’re like it’s really really tiny differences there so like to be honest, this is in my opinion probably the the most perfect line that I’ve definitely reviewed so far and unlike others.

I’m not going to throw that around and say this is the most perfect clone guys every single video that I make because they can’t all be perfect this one having said that I think I’m going to give it top marks as being the perfect clone for now.

Are they the same?

I mean come on, just have a look at that and in terms of the strength of the magnet yeah you can’t really accidentally pop them out.

I’ll shut up now so you guys can hear the hinge.

So yeah it’s got a pretty good satisfying snap sound of it it weighs almost the same this was 48 grams this was 43 grams.

I’m not going to go through the whole connection process but you open up the real ones to give it a few moments exactly the same like come on how close can you possibly get weighs almost the same looks the same feels the same sounds, the same writing, same brush-steel finish; both lightning connectors both wireless charge like realistically and I know like sort of back in the i-10 or the i-12 days that there was some pretty substantial differences between the real air pods and the fake ones but this one the i200 TWS is absolutely king.

I can’t speak for the I200 TWS that is made by everybody but the AI 200 TWS that the pods base sends me, looks like this. I don’t really know what the other I200 TWS look like or what they sound like but this one is the most legit premium one that I’ve ever put my hands on and I think given the tests that I’ve showed you guys today and what I’ve talked about it’s pretty damn obvious that this is 70 US dollars versus 199 US dollars the perfect clone.