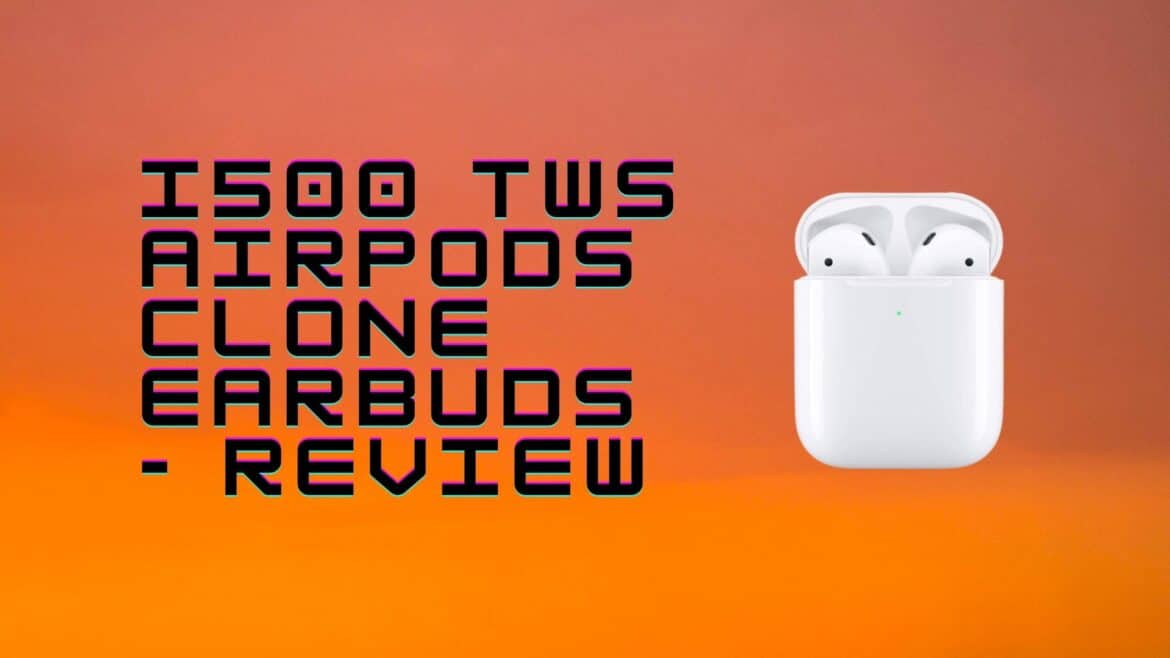 True Wireless Earbuds are getting better and better with each passing day. Today we have one of the best quality TWS replicas up for a review, it’s the i500 TWS AirPods Clone Earbuds. These earbuds are extremely cheap and you can get one for around the same price of a burger.

You’re thinking okay, Apple earpods for the price of a burger? That seems interesting.

Well the thing is that they’re not actually Apple AirPods; they look the same, they function the same; they even actually sound pretty darn nice.

So what makes the i500 TWS Apple AirPods clone so special? Let’s check it out!

The Air i500 TWS pop-up wireless earbuds are basically a Chinese knockoff of the Apple AirPods. Now, they’ve put a ton of engineering into trying to duplicate every single function of this and it’s really fascinating to see how well they’ve done and you will be startled.

I kid you not, shocked and startled at how inexpensive they are these are a tiny fraction of the cost of Apple earpods but are they as good and is this something we should be endorsing because obviously Apple spends billions of dollars on research to create great products and when other companies use their technology without licensing it, this is not necessarily good for the overall ecosystem.

In fact, I’ve spent years ignoring these sort of products because I’ve really wanted to see innovation not duplication. But, finally I knuckled under and I said you know what let’s give these a check out.

Check it out on AliExpress

Let me show you what’s in the box. The version that I got literally just has a charging cable – lightning cable. There are other versions of this that seem to come with extra case.

It comes with ear tips and all sorts of different stuff so I’m not really clear. My guess is that the factories that actually make the pods for Apple also sort of moonlight by making these other ones and so there’s different packaging variations but you know this is so close to the real thing from Apple.

But, you could probably sucker someone into thinking these are actual AirPods and really rip them off.

Oh my gosh! You know as long as you’re willing to play a little fast and loose with that intellectual property, this is what you can get out of the deal.

Honestly they’d never even know so okay now in the box like I said this one’s disappointingly slim but there’s other versions that seem to have a lot more stuff in them. You still have that fundamental design of the air pods where they just fit in there; one size fits all and if that’s not the right size for your ear.

Oh well, that’s the way it is that’s sort of an inherent limitation with the design but having said that let me just say these sound really good I was actually really impressed and not only did they sound really good but they actually have a really nice set of functionality and they sound good for phone calls.

So, ultimately now that you know what’s in the box and the design of these earbuds, let’s take a look at the function and use of these AirPods clone earbuds.

They even use a clone of the H1 chip which is the fast pairing chip that supports Bluetooth 5.0 not only that but when you are busy, you can just say ‘Hey Siri’ and your earbuds will give that data to the phone and you’ll be able to use that too, amazing!

These TWS support independent earbud use, this means that I can just put one in so if I’m gonna make phone call or something I can just have one ear in and that works perfectly fine and that guy said they’d Auto pair and auto disconnect as well.

Your iPhone will actually believe that these are actual Apple AirPods, so you will be able to view battery charge per bud and even provides me all the animation really the phone has no idea these aren’t the real things which honestly is reverse engineering.

I asked the company how are you getting the iPhone to think this is our actual proper and legal act Apple earpods and they said well, we duplicate all the functionality and this is like hmm, do you pay for the license for that technology and the answer is they don’t really do that so there’s sort of a moral and ethical question here too as to whether or not you want to acquire these.

I thought I’d still be interesting to actually check them out so they support here’s one of the other cool things especially given the price they support wireless charging so this is the fantastic Otter Box otter pads so this is a wireless Qi charging plate and if I put these on here it will actually start charging the air bots air pups and fantastic right.

You know are they as good as the Apple earpods probably not. I think the air pods have better sound and better voice but these particularly given the price are entirely reasonable alternatives especially for like kids who are likely to lose them or something right so no latency I tried watching some TV watching some YouTube and stuff everything’s perfectly fine.

The phone calls sounded decent but the music actually sounds good. There’s a crisp precision to the sound on these that surprised me again given the price first I you know I thought these were about 50 bucks and I’m like ,pretty darn good price for something that’s sort of ripoff of a $200 product but then I found these like I said for way less than that at which point you realize that having them sound other than horrible is amazing and they actually sound really good.

There’s a lot of inherent problems with having one-size-fits-all earbuds but for that, they still actually do a nice job of music reproduction and because they’re working off a Bluetooth 5.0, they give you a lot of range and they’re consistently paired.

I never had a problem where one ear was working in the other ear wasn’t; that’s super annoying. Bluetooth five really fixes that and I was walking probably 15 to 20 feet away from my phone and they were still working just fine and streaming music without any issues at all so props to them; good sound, amazing duplication of functionality and the packaging.

Now, before I tell you the price and we talked about that a little bit let me just ask if you can subscribe to my channel. I hope this video clearly demonstrates I’m really honest and candid. I will tell you the pros and the cons and I look at a lot of different products and in fact, you know I’ve been using my iPhone 10s by the time I get to my next video on the channel. It will be an iPhone 11 Pro so I keep up and that means you can keep up too so subscribe click that button really appreciate that and leave me a comment.

So as a price comparison the real honest-to-god second generation, Apple AirPods with wireless Qi charging are a 199.00 bucks, that is way more expensive than these are.

If you’re buying these sort of things on Craigslist, be super careful, because you could buy this for, and I’ll just tell you upfront , $11.99. $11 actually, no $11.50 right you can buy these for 11 bucks and then sell them to someone for 99 bucks is a half off the price of wireless charging air pods.

Check it out on AliExpress

Are the i500 TWS waterproof?

Based on tests conducted, the i500 TWS AirPods clone are not waterproof but are water resistant. The charging case however is completely waterproof and can be submerged in water up to 30 meters without getting damaged.

These earbuds are simple to configure and use. You will have to press and hold the button on the back of the charging case till the iPhone reads the device. Tap on Pair on your iPhone and voila, your AirPods clone are ready to use.

In order to charge your i500 TWS Bluetooth earphones you will have to place the earpods in the charging case and they will automatically start charging. Normally, it takes about an hour to charge both the earbuds. The charging case is wireless so it can be placed on a wireless Qi charging plate so you can recharge the case.

Will you be willing to consider buying a cheap knockoff knowing that there’s no license fees that have been paid to the original designer and inventor of all of this technology, Apple?

Or, do you feel like Apples so overpriced that anything you can do to get Apple technology that doesn’t require you having to get a loan that the bank is a good deal so let me know.

Tell me either way.

I mean, if someone came to me and said hey I got these air pod knockoffs for 15 bucks, I’d be like, nope, not interested but you know what they’re not bad at all so really I feel like your decision to acquire these might be more of an ethical question than it is a financial question which is kind of unusual in the world of Apple products because pretty much when you buy stuff from Apple it’s a financial question right?

Where Is The Microphone On MacBook Air And...