UK iPhone versus US iPhone 2022 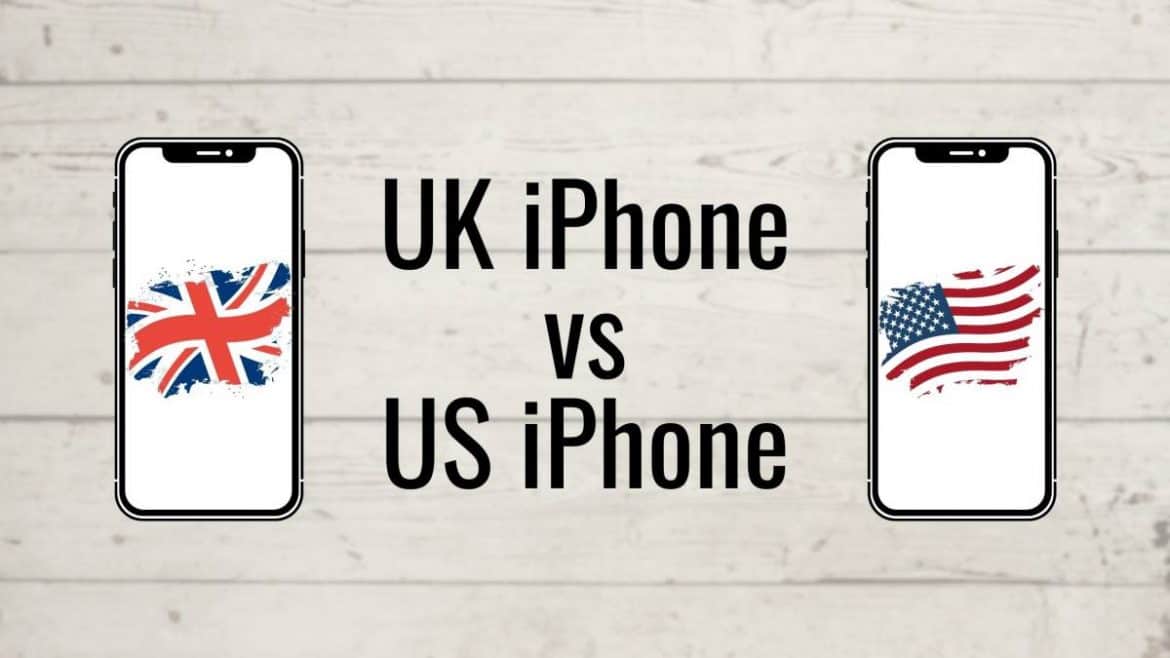 All iPhones of the same model are the same right?

It turns out that there are a few differences that exist between iPhones of the same model bought from different countries.

It might be tempting to buy an iPhone from the US due to the price difference. The price of an iPhone in the US is significantly cheaper when compared to the UK version of the iPhone.

However, the savings might not be worth it. There is a possibility that the US version of the iPhone might not be compatible in the UK.

In this article, UK iPhone versus US iPhone, I will break down the major differences between both variants and explain why it’s important to buy the iPhone that’s sold in your own country rather than picking one that’s built for another region.

Recommended Read: How Much Does the iPhone 12 Cost in the UK

UK iPhone versus US iPhone

By knowing the iPhone version, you can know the differences that exist between them. You can identify an iPhones version by observing two numbers. To find out the region of the iPhone, look at the model number. You can find the model number in the settings. Go to general and tap the about option.

In the example above, we see the part number is MWLR2LL/A.

This indicates the phone was designed for the US as the LL/A represents the US.

If the LL/A was replaced with B/A, this indicates the phone was designed for the United Kingdom.

The different versions of the iPhone do not differ much in terms of specifications. They would still have the same processor, RAM, battery etc. Their performance would also be the same.

The following are the main differences between the different iPhone versions.

Price difference between the US iPhone and the UK iPhone

As mentioned earlier, prices of an iPhone in the US are cheaper than the UK. But this might not be the case when you factor in costs like taxes and shipping. Each state in US has a different tax rate. For example, In the state of New York, the sales tax is 8.875 percent.

If you are on a holiday in the New York, you may get a refund on your trip back to the UK. But this still does not cover the tax when you arrive in the UK which can amount to 20 percent VAT. This reduces the savings that are made when you purchase the phone in the US.

If you shipped the phone from the US instead of physically buying it in the US, you have to pay a customs duty and you might not receive it until you have paid the duty. It’s convenient to couple a holiday in the US and buying an iPhone if you really want to make some major savings.

Differences in the Network

For example, the iPhone 12 that is sold in Canada cannot use the n261 (28 Ghz) and n260 (39 GHz) 5G bandwidths. This is probably the case since Canadian telecom companies don’t use these bandwidths. However, the US version of the iPhone 12 uses the above n261 and n260 bandwidths.

What this means is that if you take a Canadian iPhone to the US and try to connect to a 5G network on a n260 bandwidth, the phone will switch to LTE or connect to the nearest possible bandwidth.

The iPhones sold in the UK are unlocked. This means that you can use multiple carriers on the UK iPhone and access 5G and LTE on different carriers. The US version of the iPhone does not get sold unlocked. Therefore, you are presented with a choice of 3 carriers when you buy the iPhone from the US.

The LTE and 5G frequencies will only work in the US and will not work in the UK. This will make your phone usage obsolete therefore it is essential that you check the version of the phone you are buying thoroughly before purchasing it. Therefore, the UK version of the iPhone is more expensive than the US version.

For US iPhone 12 Pro and Pro Max, these are the following 5G and LTE bands that are applicable for US carriers :

For iPhone 12 pro and 12 pro max that are purchased in the UK, these are the following 5G and LTE bands

Apple has announced that for international (outside the US) phones that are unlocked, it will give a one-year warranty. However, this is not applicable for the phones in the US since iPhones in the US are locked by the carrier.

This is another major difference between the US and UK iPhone. The higher price of the UK iPhone is worth it considering you get an unlocked phone that comes with a one-year international warranty. The alternative to a warranty would be to subscribe to apple care which would cost additional money apart from buying the phone. Once you purchase apple care the warranty becomes international.

Will a US iPhone work in the UK?

Truth be told, US iPhone’s will work in the UK only if that particular model is factory unlocked. Unfortunately, you will have to opt for the Sim-free version if you want it to work in the UK.

But then again, if you happen to damage your iPhone it’s going to be a costly affair to send it back to the US to get repaired since the warranty won’t work in the UK. Lot’s of iPhone models will work in both the US and the UK.

But other small things such as network compatibility, the possibility of the device being locked and even the shoddy warranty of the device could prove dangerous if you don’t know what you’re doing.

Why does the iPhone cost more in the UK than US?

Well, the prices in the UK are inclusive of all taxes whereas the iPhone’s sold in the US do not include a fixed tax but would vary based on the state you buy the device. So ultimately the price for a new iPhone in the US is relatively cheaper than that of the UK.

Can I use my UK iPhone in the US?

Yes. You can use your UK iPhone in the US with a US network such as AT&T or T-Mobile. That’s because the same networks are available in the UK and coverage is not an issue when it comes to relocating yourself or simply visiting the US for a vacation.

How do I know if my iPhone will work internationally?

Check with your current operator if they offer coverage in the place you’re visiting. Also, if your iPhone is factory GSM unlocked, then you will be able to purchase a new Sim in the country you’re visiting and use a local number on your iPhone. Thus cutting down on roaming charges and international fees.

It’s important that you choose right version of the iPhone for the country you are in. People from the UK might be tempted to purchase phones at a lower cost in the US, but this comes at a tremendous cost. The 5G and LTE capabilities of the phone are dependent on the place where the iPhone is purchased.

Additionally, warranty issues also apply when buying the phone from the US and the UK. With the information above, you can make an informed decision on where to buy your iPhone.