Home About Apple What If The iPhone Was Never Invented?
About Apple

What If The iPhone Was Never Invented? 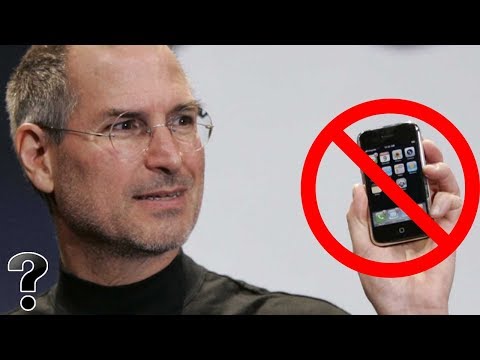 Like it or not, the invention of the iPhone revolutionized more than just telecommunications. It was a trailblazer for smartphones, an invigorator of technology, it was the match that sparked a social media generation. Where would we be without it?

Hello and welcome back to Life’s Biggest Questions,

What if the iPhone was never invented?

In 2007, before the launch of the now iconic iPhone, the most popular and exclusive phone was the Blackberry. Looking at it now actually kind of stresses me out. The most high end phone still had flip screens and clunky buttons. Elsewhere, luckily the trend for tiny phones was on the decline as cell companies realized users liked bigger screens… but phones were clunky and almost all of them featured bulky keyboards. It isn’t true to say that the iPhone was the first phone to use touch screens, others did have it but they were rare and by and large sluggish, leading many industry experts to write them off as something consumers didn’t want.

All things considered, it is safe to say that without the iPhone we would be stuck using phones with small screens and teeny keyboards that just don’t compensate for a chunkier finger…perhaps we would still have those poncy pens! If we were stuck with keyboards, our screen ratio would be much smaller, making browsing the web much harder and less readable. You know what else we wouldn’t have without the iPhone? Fast internet.

The iPhone was an innovator and a boundary pusher in many ways and its creation sparked a relationship with the internet other phones struggled to have. Remember getting 100 megabites of data a month? Gross. I am sure internet usage on phones would have increased and become quicker eventually, but the invention of the iPhone forced the issue.

We may have internet, but without the iPhone, we may not have social media, especially not sites like Snapchat and Instagram. Why? Well, the slow internet, but worse, the awful cameras. Before the iPhone, most high end phones had 2 megapixel cameras. Of course the iPhone pioneered the front facing camera, which in turn pioneered the selfie. Imagine a world without snapchat and Instagram, and selfie filters?

And…imagine a world without youtube. Okay, youtube would still exist without iPhones but the pair evolved together, with iPhones allowing people to record themselves more freely on the fly. Essentially, iPhones gave rise to vloggers, and enhanced the platform by allowing youtube onto peoples phones, placing video content in the hands at the touch of a button. It wasn’t just Youtube, Instagram and Snapchat that were either born or enhanced in the wake of the iPhone – The iPhone’s innovative all screen design and fast IOS operation system encouraged the development and function of so many apps, especially gaming and streaming apps.

If phones stayed the way they were before the iPhone with the prominence of keyboards, screens would have been too small to enjoy Netflix or Candy Crush Saga, let alone the issue of the internet being far too slow. Without iPhones, we would probably still be listening to music on our iPods or other MP3 Players, too. The iPhone was the first phone to successfully marry music and cellular devices, while others could play mp3s, they didn’t have much space on them and the upload process to the device was arduous. The development of the first iPhone has led to further technological innovations with future iPhones too, for example, developments in wireless charging, the emergence of Siri and of course the world’s explosive love for emojis.

Why iPhone is a MUST?

IPhone’s allowed us to communicate on much deeper levels than just sms….with the creation of the iPhone, Apple actually managed to create more than just a phone; they created a communication device, a recording device, an entertainment device, a health monitor and a business platform all in one. Like they promised back in 2007, they really did change phones for ever. But of course, it isn’t just telephones that the iPhone transformed, iPhones were the inspiration behind the iWatch, which can now BE used as telephones…as Apple continues to be at the forefront of technological creation, I am sure they won’t stop there, either. Who is to say we won’t be able to communicate via our mirrors in the future….I for one can imagine the worlds first iCar….iHouse…..

Of course, the iPhone can thank their own predecessors, the iPod, for their creation, but it was the development and release of the iPhone in 2007 that altered human communication forever. Perhaps another tech company will out manouver them one day and change the game in a new, previously undiscussed direction, but until then, Apple reigns as King, as Queen, as overlord of communication technology…. So, that is a glimpse into what the world might be like without the iPhone. What do you think to this video? Do you have anything to add to the discussion? Let me know in the comments section below. If you want to be the first to hear big answers to big questions, make sure you have that notification button turned on.

What Is The UK Apple Student Discount

How to Report Spam Texts on an iPhone...

Will UK Apple TV Work in the US...